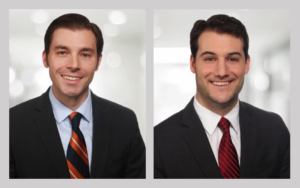 Kane Russell Coleman Logan has announced the promotion of Demetri Economou and Scott Riddle to the position of Director. Houston-based Economou practices in the firm’s Energy Group as a litigator and Riddle is a litigator and crisis manager in the Dallas office.

“Demetri and Scott each set a great example for our firm’s younger attorneys,” Managing Partner of the Firm Karen Cox said. “They willingly dedicate part of their time to advising and guiding both clients and other attorneys through complex situations. We are pleased to recognize Demetri and Scott for their hard work, and we are proud to have them here at KRCL.”

Economou has been named to Thomson Reuters’ Texas Rising Stars for three consecutive years and recognized in Houstonia Magazine’s 2019 Top Lawyers. In 2015, Economou received the Houston Bar Association President’s Award. He earned his J.D. from South Texas College of Law and graduated with his B.A. from the University of Texas at Austin.

Recently, Riddle was recently listed in D Magazine’s Best Lawyers Under 40 for the third year in a row, and he has been named to Thomson Reuters’ Texas Rising Stars for three consecutive years. He holds a J.D. from Baylor Law School, where he graduated with special distinction, and he graduated with honors from University of Arkansas, where he earned his Bachelors degree.