For years, environmentalists and conservationists have made it an objective to see the Greater Sage-Grouse – a bird more famous for its strutting, mating rituals than anything else – listed on the endangered species list.

Listing under the Endangered Species Act (ESA) would have gained the Greater Sage-Grouse greater protections in its natural habitat, and made production of minerals in those same areas all the more difficult.  The bird, although not flightless, primarily nests, struts and mates on the ground (among the sagebrush) – and its leks (groups) can cover a surface area anywhere from 1 to 90 acres, each.

The Greater-Sage Grouse’s distribution ranges throughout almost every western state, and right in the middle of some of America’s most productive resource plays (click the image to enlarge): 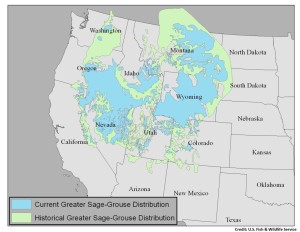 So, it is no surprise that a great amount of time, effort and money has been expended over the years by proponents of natural resources extraction, in order to keep the Greater Sage-Grouse off the endangered species list.

The Department of Interior’s Decision: No Listing

On September 22, 2015, the Department of Interior, through its Fish & Wildlife Service (FWS), decided not to list the Greater Sage-Grouse on the endangered species list.  The bird did “not face the risk of extinction,” and it would have been unduly burdensome on the economy to risk the listing across the species’ 173-million acre habitat.

“Hooray!” Western conservatives and members of the oil and gas industry must have cheered as they read the headlines.

But elation likely turned to deflation, as they read deeper into decision, for in place of listing the bird on the endangered species list, the government instituted a series of onerous land-use restrictions.  These restrictions (which some argue are harsher than the ESA restrictions had the bird been listed) are now the subject of a lawsuit by the governor and legislature of the State of Idaho (the “Idaho Lawsuit”).

The Restrictions and the Idaho Lawsuit

Rather than simply list the bird on the ESA, affecting its entire habitat, the government decided to take a piecemeal approach in coordination with a labyrinthine 341-page government memorandum, signed by Daniel Ashe, Director of FWS.

The convoluted regulations are promulgated by various government agencies, like the Bureau of Land Management (BLM), which manages most federal lands, and the gist is as follows:

Although remaining "ESA-unlisted," anywhere from 35 to 60 million acres will officially become Greater Sage-Grouse habitat (of a total of 173-million acres of range), and will thus be subject to burdensome restrictions not very different from those under an ESA listing.  For example, the BLM’s sub-plan institutes protected spaces and operating restrictions around known mating zones (and, remember, a single Greater-Sage Grouse lek can cover up to 90 acres).

According to the Idaho Lawsuit, which has not yet been joined by any other Western states, the civil action challenges 64 such separate land use plans for federally-managed lands, released in close coordination with the FWS decision.

“At a time when America’s oil and natural gas producers are already facing significant cost uncertainties, today’s decision will put more restrictions on our energy producers, making it more costly to operate ….”

Under such a regulatory scheme, animals which were thoroughly vetted and debated over for ESA listing in the past, but who were ultimately not listed, could theoretically be “shadow listed” like the Greater Sage-Grouse.  This is certainly a risk.

Which begs the question: what will be the next Greater Sage-Grouse?  And, how much of its habitat covers up America’s vital natural resources?