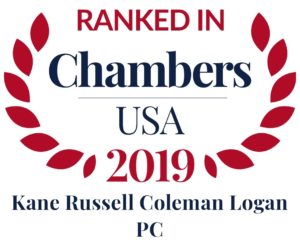 The 2019 Chambers USA guide ranks four individual attorneys and two of the Texas-based law firm’s practices, including individual recognition for both Joseph M. Coleman and Raymond J. Kane for the 10th consecutive year.

The firm’s Bankruptcy/Restructuring practice was ranked for 2019, with the guide noting the firm’s strong creditors’ committee practice which is active across the USA as well as the group’s notable work for debtors, trustees and asset purchasers. The practice group’s strength in pre-bankruptcy and out-of-court workouts, experience in defending fraudulent conveyance actions, and activeness in healthcare, energy, real estate and retail sectors are also highlighted in Chambers’ review.

The firm’s Real Estate practice group has also been recognized by Chambers for 2019, earning recognition for the firm’s representation of owners, developers, investors and lenders in polished and innovative real estate transactions.

“KRCL is honored to be recognized once again by Chambers on the recommendation of our clients and peers. A decade of recognition in Chambers is a testament to our 27 years of hard work and excellent client service,” Joe Coleman said. “As we bring on the next generation of great lawyers, we’re striving to maintain and build upon this great legacy.”

In addition to the firm’s recognition on the practice area level, Joseph Coleman, John Inabnett, Raymond Kane, and James Prappas have been individually ranked by Chambers USA.

Joseph Coleman is ranked in Bankruptcy/Restructuring for the 10th consecutive year. The guide acknowledges Joe as “extremely organized and thorough” with an ability to always follow through. He currently serves as the managing director of the firm and chairs the Insolvency, Bankruptcy & Creditor Rights Section.

Raymond Kane is ranked for his Real Estate practice for the 10th consecutive year. A founding director of the firm, Ray represents landlords and tenants in retail, office and industrial development and leasing transactions. Clients say, “he is pragmatic, knows what matters and creates an efficient process.”

John Inabnett has been named a Recognized Practitioner in Real Estate for the second year. John is a director of the firm, and he represents real estate developers, landlords and tenants in lending transactions. He has significant experience in retail and office development, leasing, and financing transactions.

James Prappas is ranked in Immigration law. James is a board-certified immigration specialist with more than 30 years’ experience representing businesses, families, and individuals in employment-based immigration, family-based immigration and naturalization matters. James is described by sources as "very thorough and attentive to detail.”