With a primarily Texas-based practice, he frequently works in state and federal district courts located in the region, but also represents clients in litigation outside the state of Texas.

With particular interests in personal injury and construction litigation, Roland finds it professionally gratifying to defend clients in these arenas. Some cases hinge on questionable claims, and some are a challenge because they involve complex issues with significant construction projects and, in personal injury litigation, deaths, significant injuries, or otherwise emotional matters.  Clients value Roland’s thorough preparation, steady demeanor and his ability to uncover the facts. He frequently advises clients involved in litigation stemming from trucking accidents and has made it a priority to attend continuing legal education classes on this topic.  Over the years, Roland has also become well-versed regarding construction-related matters, including those involving both residential and commercial construction.

Prior to becoming an attorney, Roland worked for a major oil and gas production company for 11 years, working in materials management, oil and gas accounting, regulatory relations and handling matters pertaining to contracts with working interest owners and other entities. This industry perspective and valuable, non-legal experience enhances his ability to serve clients. Roland’s West Texas roots and upbringing, including working in the oilfields in the summer while in high school and college, influenced his work ethic and brought him into contact with people of all walks of life, which he draws on in his daily activities and interactions while serving his clients.

A fan of physical activity, Roland wakes up most mornings at 4:15 for weight training and other forms of exercise. He and his wife enjoy being involved in the lives of their two grown children, including watching their son play college baseball and keeping up with their daughter’s career as a television news reporter. He also cheers on the Houston Astros, both at Minute Maid Park and on television.  He also enjoys serving as a volunteer, greeting new families in the Creek Kids Children’s Ministry at Clear Creek Community Church.

Roland has defended and tried numerous cases involving the subject matters listed above, including but not limited to the following: 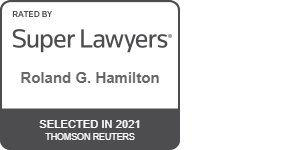